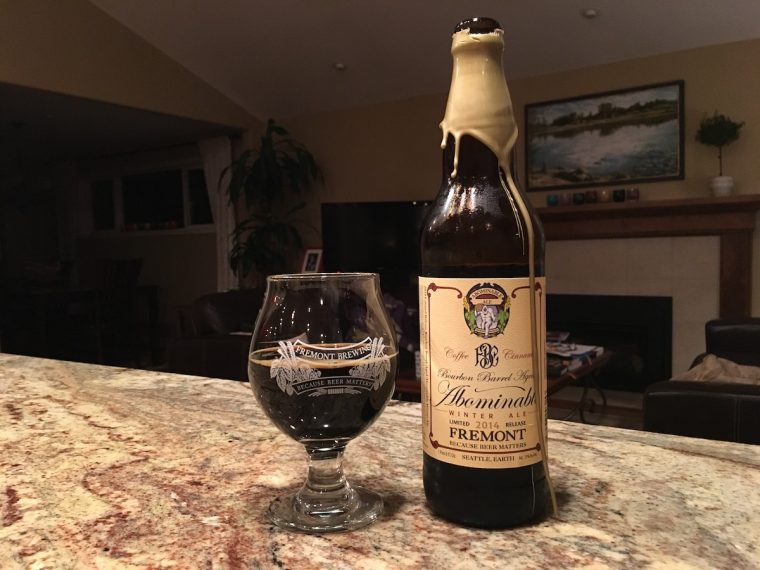 It pours a rich, dark brown with a dark tan thin head of foam. The aroma is coffee, bourbon, spice, and coconut. The flavor is intense. Complexity with cinnamon, bourbon, vanilla, leather, dark roasted coffee, all formed together in a way that does a dance in your mouth. The finish is warm and long with good carbonation and smooth mouthfeel. There’s no booziness from the 11% ABV.

Coffee Cinnamon Bourbon Barrel Aged Abominable was aged in 12 & 15-year-old American Oak bourbon barrels and is a blend of 12, and 24-month old barrel strength Abominable Ale. For barrel-aged beer fans, this is one to search for. Here’s a link to the current version. 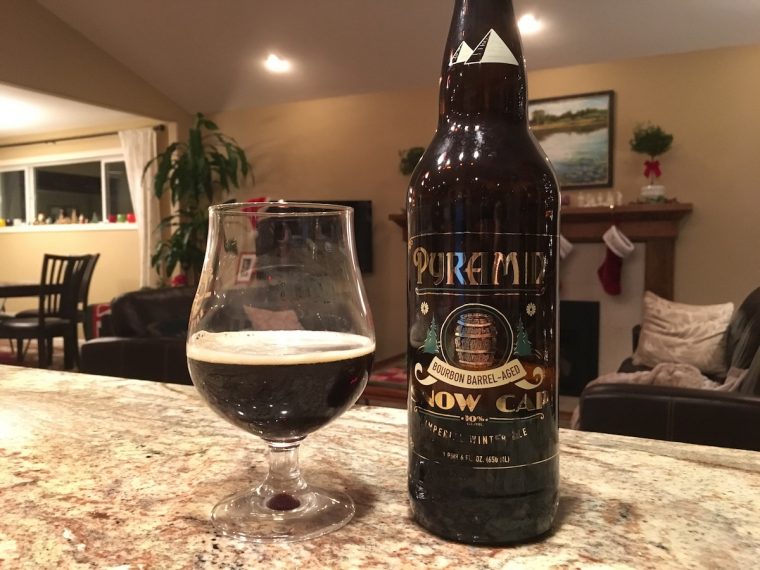 BBA Snow Cap pours dark mahogany with a stiff tan head of foam. The aroma originates with the 10 months of barrel-aging: bourbon, vanilla, and sweet malts. The East Kent Golding hops give it an English Barleywine flavor. Distinct wood and vanilla, with a touch of chocolate from the barrels. A creamy mouthfeel with good carbonation hides the 10 ABV booziness.

Based in Seattle, Pyramid Breweries began as Hart Brewing in 1984 with the flagship brand of Pyramid Ales. In 1996, the company was reborn as Pyramid Breweries and currently offers craft beers produced under the Pyramid family of ales and lagers. 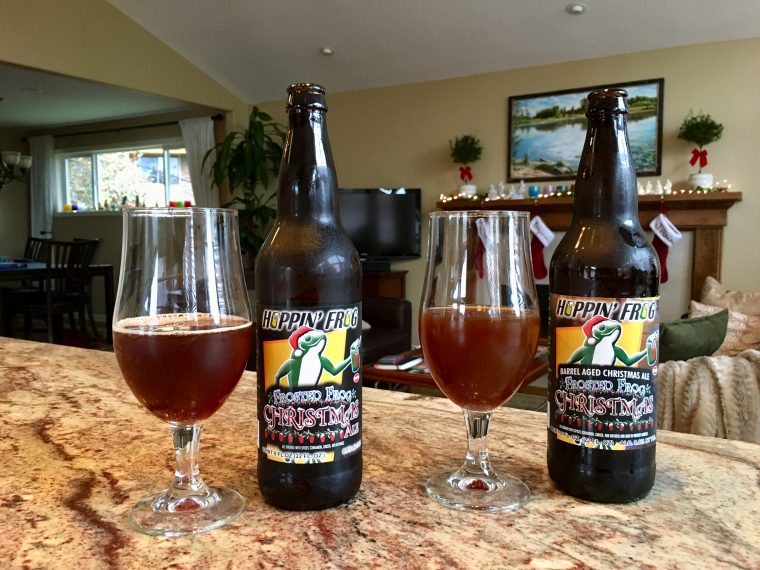 First up, the regular Frosted Frog Christmas Ale. It pours fox-tail brown with a thin head of foam. There’s gingerbread on the nose. Spices dominate this beer. It’s ginger snap cookies in a bottle, with sharp cinnamon, ginger, and nutmeg spices on a sweet, malty base.

Now for the barrel aged version. This one pours a bit darker and murkier with no foam. The sharp ginger aroma from the regular version is dialed back with a hint of vanilla from the barrels. Barrel aging adds a lot of depth to the overall flavor profile. It’s become gingerbread cake with more malty roundness. Both beers are 8.6% ABV and 12 IBU.

You’ve got to like this style of cinnamon, ginger, and nutmeg spice-dominated beer to drink local Christmas beer in Ohio. I’ve termed this flavor profile “Ohio style” because many of the breweries in the region shoot for it, and breweries in other regions don’t. 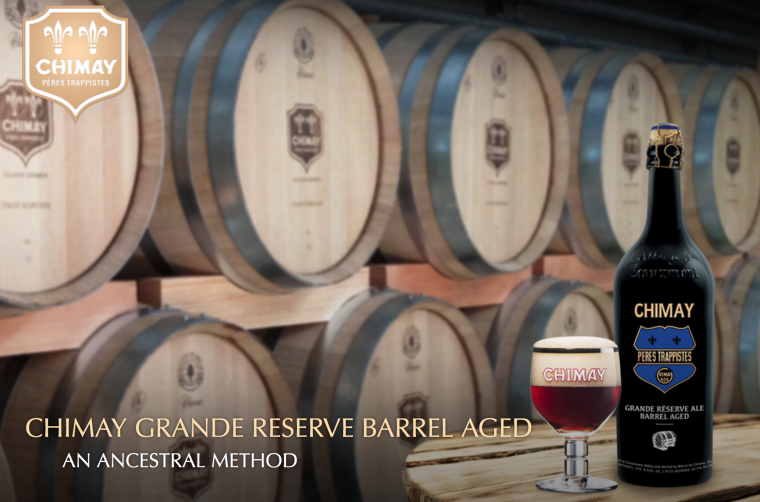 I don’t have a bottle yet, but here’s a video from

It’s no secret that Santa’s favorite Christmas beer is De Dolle Brouwers’ Stille Nacht. It’s a Belgian Strong Ale made with brewing equipment from a long-defunct brewery in the eastern Belgium town of Esen. Several friends bought the equipment in the 1980s called themselves the Mad Brewers (De Dolle Brouwers) and began to brew beers with life – yeast – still in them. The little guy on the bottle is often mistaken for a snowman, but is actually a yeast, representing the living nature of bottle-conditioned beer. 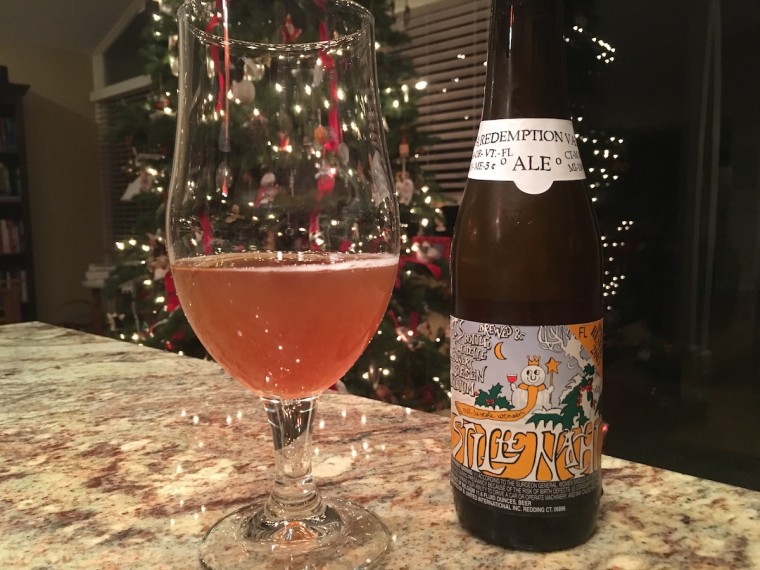 Mac & Jack’s Brewing Company has bottled their first beer. Since 1994, Mac & Jack’s has been a favorite tap-only beer in the Pacific Northwest. Their African Amber is the quintessential unfiltered Amber, and sales prove it. Their first beer to be released in bottles, however, is Bourbon Barrel Aged Cascadian Dark Ale. Here’s my review of the 2015 vintage. 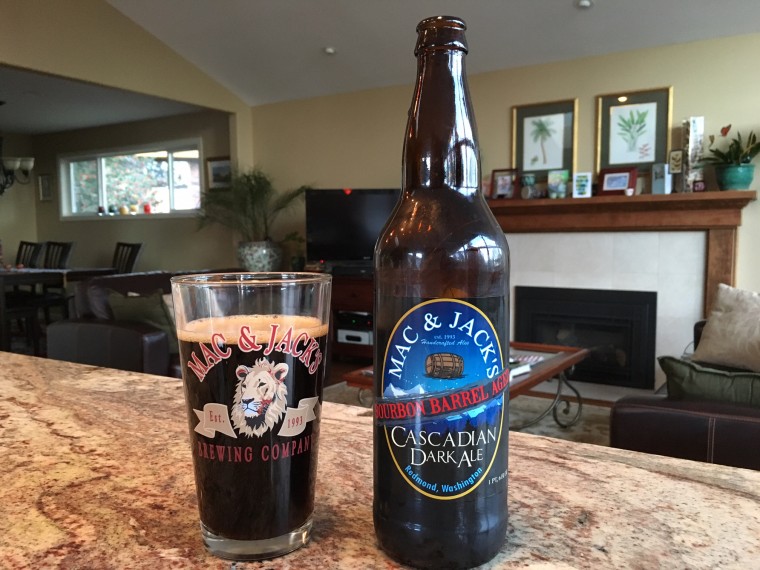 Black Raven Brewing Co. of Redmond, Washington is fast becoming one of my favorite breweries. They just get it right. In recent years, Black Raven has been aging beer on wood. Three Sundays Tripel is an Belgian style tripel aged on French and American oak. 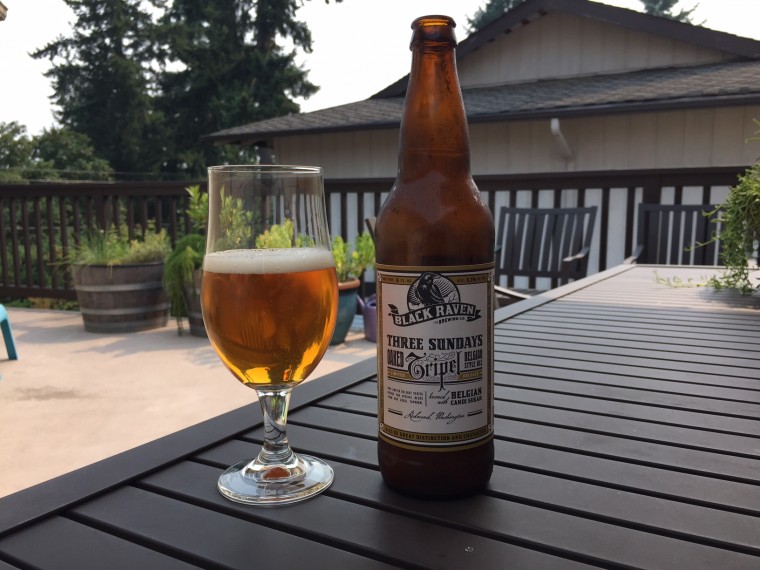