Oakshire Brewing brews in Eugene, Oregon – the middle of the state and the middle of the Northwest craft brewing scene. Ill Tempered Gnome Winter Ale is made with six specialty malts and four American hops. It’s close in style to an English Strong Ale, but with stronger hops as you would expect from an Oregon craft beer. 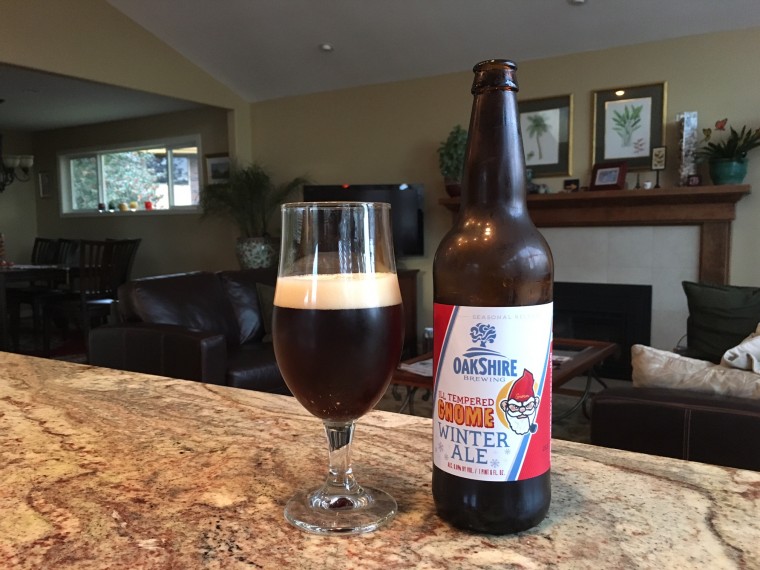 Logsdon Farmhouse Ales is an Oregon organic brewery in Hood River. Oak Aged Bretta is a farmhouse ale loaded with brettanomyces and rounded by oak. On opening this well-chilled two-year old bottle, it sprayed a fountain of foam out like a NASCAR winner with a bottle of champagne. Once I got some in my glass I could see the cloudy honey-rosé color topped with

Hair of the Dog Brewing Company of Portland Oregon has been making age-able craft beer for 20 years. Fred is one of his regular beers that’s loaded with hops, rye malts and Belgian candi sugar. Brewmaster, Alan Sprints, makes several barrel-aged versions of this beer. Bourbon Fred From The Wood 2013 was aged at least 18 months in oak barrels. I’ve aged this bottle conditioned beer for another

I stopped by Hair of the Dog Brewery in Portland, Oregon the other day and picked up a bottle of Doggie Claws, their Christmas Ale. It’s a Barley Wine made for aging. 2014 Doggie Claws pour muddy brown with almost no foam. The lack of carbonation is something that brewmaster Alan Sprints is unconcerned by. He once wrote, “Beer is more than bubbles.” The aroma has strong sweet malts, blackberry, a bit of cherry, and orange zest from the hops. The taste is sweet caramel, syrupy malts, big floral hops, with dark fruit, molasses and orange. It has almost no carbonation, that some will find off-putting. I don’t mind the lack of carbonation. There are a lot of malts and hops (70 IBU), but the malts win out in the body and hops in the finish. It’s 11% ABV and has a long finish.

Alan Sprints states on the bottle, “Doggie Claws is made with Organic Pilsner and British Crystal malts. I used simcoe and amarillo hops along with dark wild flower honey collected on Mt. Hood.”

Bridgeport Brewing of Portland, Oregon is one of the early micro-brewing pioneers. This year Bridgeport celebrates 30 years of brewing. Ebenezer Ale is a Winter Warmer. Ebenezer pours the color of dull penny with a light tan head of fine foam. The aroma is light caramel malts, slight citrus and floral presence. It’s medium-bodied, with caramel malts at first and some nuttiness. There’s some citrus, earthiness, and vegetal notes from the hops. It’s very drinkable, with no spices added. There’s strong, smooth carbonation and 6.4% ABV in this limited release beer.

The label features a package-toting, smiling Ebenezer Scrooge, of A Christmas Carol fame. This picture is obviously after his visitation with the 3 ghosts, who were actually none other than yours truly with a little make up. May your own life transformation be as gracious as Ebenezer’s.

Next up is a Cascadian Dark Ale. What’s that you ask? In the Cascade Mountains region (Vancouver BC, Washington and Oregon) they created a style called Cascadian Dark Ale. It’s malted and dark like a Porter, but it is hopped up like a West Coast IPA. Bad Santa pours nearly black with a hearty tan head of foam. The aroma is Wreck the Halls pours reddish-orange with a bubbly head that disappears quickly. There is citrus and